He does all the things that are detailed in the job description; the stuff he is supposed to do as part of the gig’s basic requirements.

Andrew Harris churns out yards when the ball is put in his belly. He is a dangerous and sure-handed receiver out of the backfield. And his abilities to read and know how to chip in for the protection schemes might just be one of the most under-rated aspects of his game.

So, for all of that, Harris has earned every dime of the free agent deal he signed with the Winnipeg Blue Bombers last winter after spending the first seven years of Canadian Football League career with the B.C. Lions.

But as the Bombers continued preparations for Sunday’s West Division Semifinal in Vancouver against the Lions – the club’s first playoff tilt in five years – it’s also clear the 29-year-old Winnipegger has brought much more than that to his hometown team.

It’s an attitude, evidenced by his work done during the practice week. And it’s an anger/drive he has whenever he is pushing the pile and grinding for every inch. 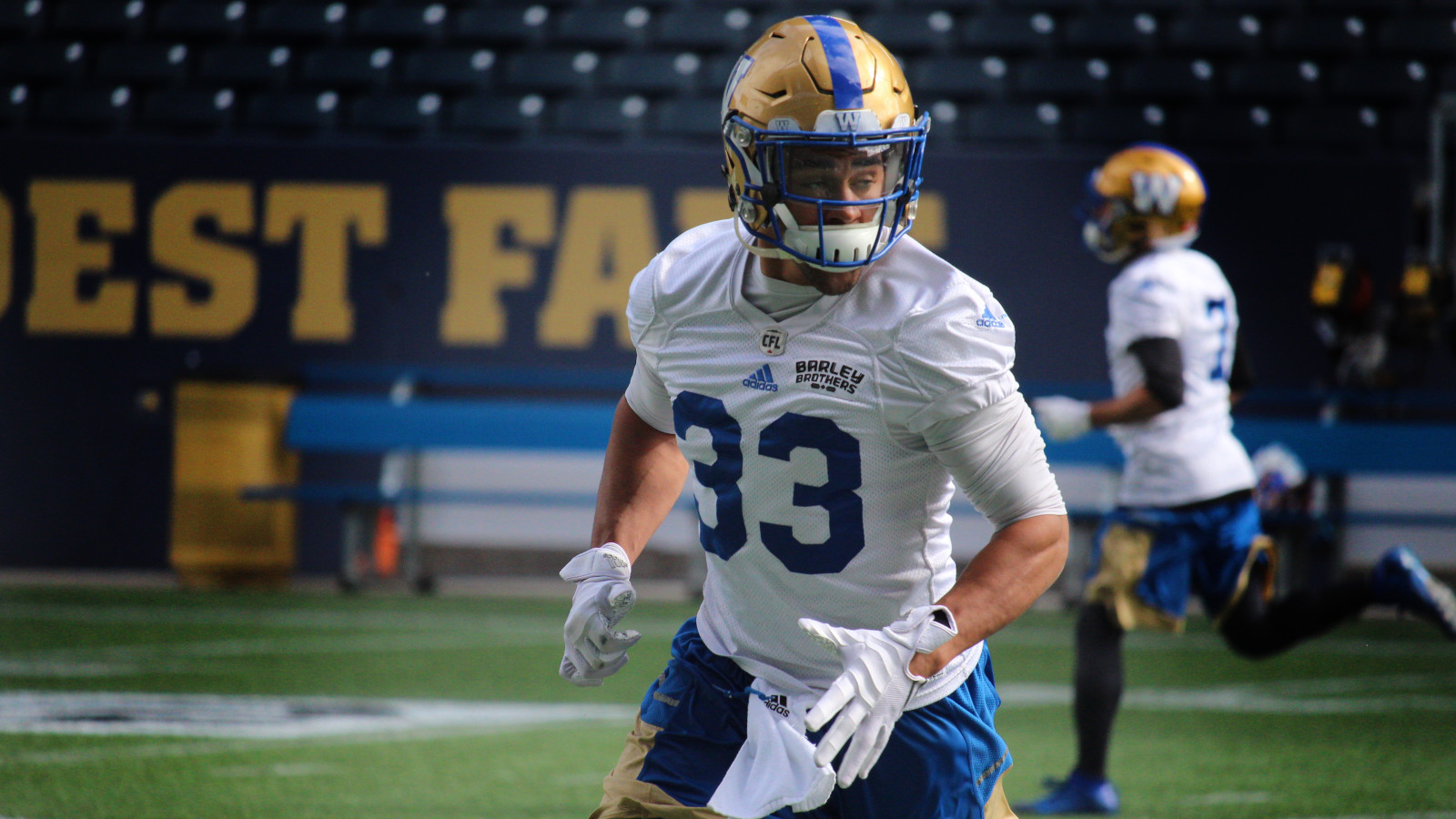 And in many ways, that makes him one of the most compelling figures Sunday afternoon, not because of the obvious storyline of returning to face his old club in his old stomping grounds, but because of the tone he sets for his current squad.

“He’s one of the focal points of our offence,” said Matt Nichols after practice Thursday. “He’s a guy that does everything, from protecting to breaking tackles to making big plays. I mean, we had it called back for an offside, but the second play of the game the last time we played there he took a swing pass check-down, which is normally a five or six-yard gain, for 70 or 80 yards for a touchdown. He broke a lot of tackles, converted a lot of second and longs for us just by breaking tackles.

“When he does those types of things it just gets everyone fired up. When I see that from him I don’t want to be the one to let him down. When you see your teammates giving that type of effort it’s contagious.”

Now, clearly the Lions have moved on without Harris. More than moved on – they finished first in the Canadian Football League in rushing with 2,082 yards, or 115.7 per game, behind a two-back rotating tandem that included Jeremiah Johnson (809 yards) and Anthony Allen (436) while multi-purpose threat Chris Rainey chipped in with 309 yards.

But while he says he would be cranked up for Sunday’s game no matter who was across the line of scrimmage, it’s also not a coincidence that two of this best games this year came in the back-to-back wins over the Lions last month.

Harris had 266 combined yards in those two games – 139 yards rushing, 127 through the air – but those numbers don’t detail in full his contributions in the two victories. Consider that 13 of his touches in those games were for first downs, including three second-down conversions.

Again, that’s all part of the something-to-prove approach he takes with every touch in every game. Harris summed that up best when asked Thursday how he thinks he has helped the offence the most this season.

“It’s playing with a chip on my shoulder and playing with that attitude and bringing that mentality to the locker room of tenacity,” said Harris. “That’s been the biggest thing. Obviously, a running back is supposed to get yards when he gets the ball and catch the ball when it’s thrown to him and block for the quarterback.”

That’s an over simplification, perhaps in an effort to be modest. His quarterback wasn’t so filtered in his praise of the man who lines up behind him.

“Honestly, he’s exactly what I thought he was,” said Nichols of Harris. “He’s an extremely hard worker, a guy that never gives up, a guy that you want to go to battle with and extremely smart. It’s obviously a pleasure playing with a guy like that; he makes my job a lot easier. It’s been great to be able to play with him and I’ve had a lot of respect for him since I’ve been in this league.

“IT’S NICE TO HAVE HIM ON YOUR TEAM RATHER THAN STANDING ON THE SIDELINE WATCHING HIM BREAK TACKLES… IT CAN BE FRUSTRATING TO WATCH FROM THE OTHER SIDE.”

The other storyline that makes Harris such an intriguing factor this weekend is the biggest and most obvious. After all, it’s one thing for the hometown guy to return and lead them to the playoffs – that drought alone was five years – it’s another to be leading his team deep into November.

“Absolutely. It’s more than just football, there’s a lot of pride,” said Harris. “Getting into the playoffs was huge. I was at a friend’s house yesterday and they’re just so excited. They’re having a big party and they’re just so excited we’re in the playoffs again and the fact that a family friend is part of the team. When I hear things like that and I get the ball I just want to do that much more with it and make that much more of a play.

“There’s a lot riding on this for me and I’m excited to get it going for real.” 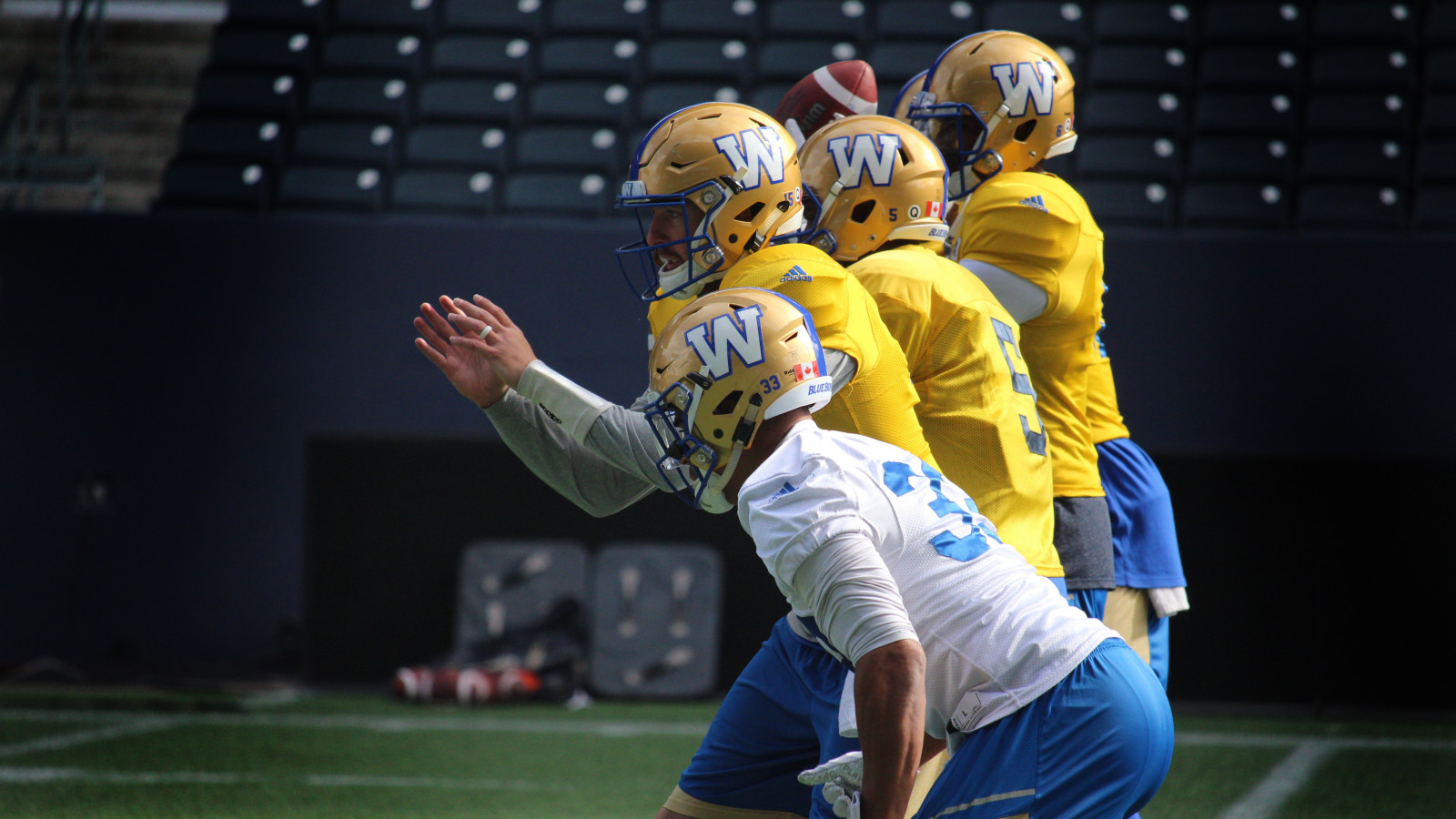 Medlock’s numbers are well documented now – he broke the single-season CFL record with 60 field goals and led the loop in scoring with 227 points – and he’ll be up against Hamilton Tiger-Cats return man Brandon Banks.

“It’s good. A long season and a lot of hard work for a lot of these guys… holders, Matt Nichols (Weston) Dressler and snapper Chad Rempel,” said Medlock.

Julian Feoli-Gudino has been getting more work with the No. 1 offence this week, stealing them away from Rory Kohlert. Over the last three games Kohlert has had a couple of passes glance off his hands and turn into interceptions – the second returned for a touchdown on the Bombers first possession in Ottawa last week.

Bombers coach Mike O’Shea was asked after practice on Thursday if the move is any indication the team has lost confidence in Kohlert, but quickly dismissed that notion, even with Feoli-Gudino’s workload increasing.

“We know Rory can go in and play any position at any time,” said O’Shea. “He doesn’t need a lot of practice.”

The Bombers’ practice Friday will be closed to the media and the public, but Thursday’s session was just as crisp as the day before. And that extra attention to detail, coupled with the enthusiasm, has been obvious.

“Guys are excited. Guys are chomping at the bit to get out there and I think we’ve had two of our best days of practice of the year,” said Nichols “Guys are locked in, it’s very competitive at practice and we’re making sure we’re in full stride come game day.

“It’s a different focus, not just from earlier in the season but since we came back from the bye week (in mid-October). I felt the sharp focus we had during the middle point of the season just wasn’t quite there… we were a little off and I feel like we’ve got that back. Guys understand the importance of this week and we’re making sure we all do everything we can to make sure we win this game.”