Andrew Harris isn’t only a Canadian, he’s a Winnipegger and a proud product of the Eastman Raiders, Grant Park Pirates and Oak Park Raiders.

And so, heck yeah, when the Winnipeg Blue Bombers were writing out names for their free agent shopping list this past winter, ‘H-A-R-R-I-S’ was absolutely scrawled at the very top.

Still, landing the 29-year-old running back wasn’t just about his birthplace or his nationality. Those are bonuses that should help business at the ticket wicket and keep the good folks in the Bombers marketing department busy. 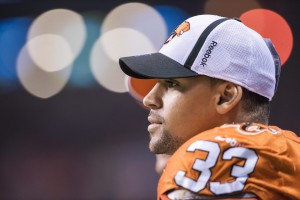 First and foremost, Harris was added because he is a dangerous threat out of the backfield, both as a ball carrier and a receiver. And for a Bomber offence that is looking for as many weapons as it can get to surround quarterback Drew Willy, Harris packs a heavy wallop.

We bring this up today as part of the next installment of Bomber positional analysis series and focus on the men who will line up behind Willy in the Bomber backfield at both the tailback and fullback positions.

And it could be argued that no free agent signing in the Canadian Football League this past winter made more sense – both for the team and the player – than the Bombers adding Harris.

A two-time CFL All-Star in 2012 and 2015, Harris was just 20 yards short of winning the league rushing title, finishing just behind Montreal’s Tyrell Sutton with 1,039 yards along the ground and seven touchdowns while adding another 53 catches for 484 yards and two more scores.

And it’s those numbers as a receiver – averaging 59 receptions a season over the past four years – that could make Harris such an intriguing and dangerous part of Paul LaPolice’s new offence.

The club could use some stability at the position too, as both Cameron Marshall and Paris Cotton – one and two in rushing for the Bombers a year ago – are gone. As well, the Bombers have gone four straight seasons with a different running back leading them in rushing yardage (Chad Simpson in 2012, Will Ford in 2013, Nic Grigsby in 2014 and Marshall last year).

Now, lost in the hype of the Harris signing this winter – and it was considerable – was the quiet addition of another ex-Lions ball carrier, Pascal Lochard. 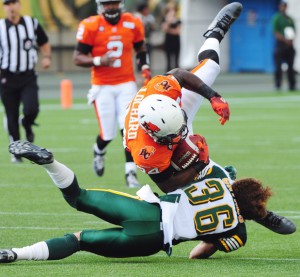 The Bombers were big on the Laval bruiser during his draft year in 2014 and he’s dropped 15 pounds this winter to be ready if needed as a back up to Harris and not simply as a blocking back.

Two imports are currently wrapping up rookie camp with the Bombers in Carlos Anderson, the diminutive speedster who almost made the team last year as a returner before wrecking his knee, and Tim Flanders, who set 34 records at Sam Houston State before getting a look from both the B.C. Lions and Calgary Stampeders.

But with the Bombers going homegrown in the backfield and stacked with return candidates like Quincy McDuffie, Solomon Patton and Justin Veltung – who handled some of the return chores last year – landing a gig on the roster, let alone as the starting tailback, is putting the ‘long’ in long shot.