Andrew Harris has felt both the cold and warmth since returning to Winnipeg, this time as a member of the Blue Bombers.

Since it was announced on Tuesday that the 28-year-old running back was leaving the B.C. Lions to suit up for his hometown Bombers, Harris says friends and family and “people out of nowhere” have been welcoming him and expressing excitement. 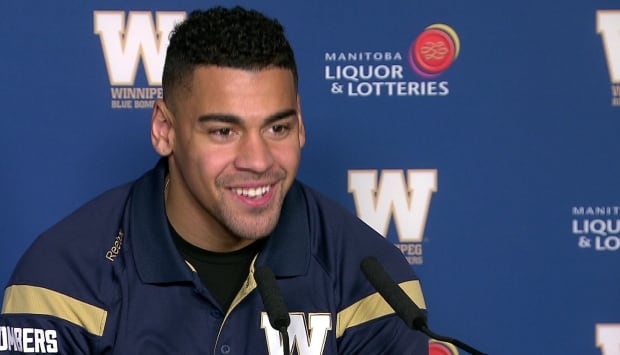 Andrew Harris meets the media on Friday in Winnipeg. (CBC)

Same thing at the Jets game Thursday night at the MTS Centre. Harris said strangers wanted to shake his hand and congratulate him.

“It’s been crazy [but] it’s a good feeling,” he told reporters at his first meet-and-greet with the local media on Friday.

But he admits, since moving to the west coast after high school, he’s been away from Winnipeg long enough that it’ll take some time to get used to winter again.

“I actually got out of my car today … and my nostrils just froze up,” he said. “It’s cold but it’s nice and warm here in the summer, so I’m just waiting for that.”

Harris is one of nine new players the Bombers have announced in the past two weeks.

He said he was hurt when he learned the Lions weren’t planning to re-sign him but has come to accept it as part of the sports biz.

“It kinds of stings a little bit. You grow up there in the [football] ranks, so it’s a tough pill to swallow but at the end of the day it’s the nature of this business,” he said. “How things go down, it’s not always easy.”

He was quoted at the end of last season as saying he didn’t really feel appreciated for his efforts. That didn’t sit well with Lions GM Wally Buono.

Harris admitted on Friday he could have handled things better but called himself “an emotional guy.” He said things are fine between the two of them now.

Coming back home is something he’s always had in the back of his mind, he said, adding it’s where his eight-year-old daughter still lives and where he has some business opportunities.

He currently has two businesses in the Vancouver area.

“I had a pretty good idea I could probably end up here [during free agency] but I just didn’t know for sure,” said Harris.

He said he’s “excited to get to work” with the team and put his “hunger to be successful” back on the field.

“More than ever now, coming to my hometown and playing in front of so many people I know and love and care about, I really want to represent this city well and do something for this city as far as being a Winnipegger,” he said.

“That hunger and that emotion’s going to be flying high come the first game. It’s gonna be fun.” Wedding bells will soon be ringing for one of the Winnipeg Blue Bombers. But before running back Andrew Harris ties the … It was the work of Harris and the offensive line in front of him that set the tone for the night, … The VI Raiders are excited to announce that #33 is coming home. Andrew Harris will be working with new recruits and … On the eve of the 104thGrey Cup Playoffs, the Canadian Football League (CFL) unveiled the nine players nominated for the distinguished … He does all the things that are detailed in the job description; the stuff he is supposed to do as part … Heart of a legend – Andrew Harris honoured by teammates Harris a hit with Bomber fans Andrew Harris isn’t only a Canadian, he’s a Winnipegger and a proud product of the Eastman Raiders, Grant Park Pirates and … HARRIS GETS ON HIS HORSE

He put pen to paper on a new contract in February and has been sporting Winnipeg Blue Bombers colours since.